When I started out on a journey of trying to improve the performance of ironic a few months ago, the journey ended up taking a bit of a different path from what I expected. But I can now say with confidence, because all of the patches have merged and even backported to our "Wallaby" release, that we've made Ironic faster.

The path was similar to what was expected, but half of the effort became building consensus and sharing context. Plus, very verbose notes in code do tend to help. Along this path, we also learned some new aspects, and were able to incorporate changes to hopefully improve the overall situation for most operators.

Where can I get this?!

If you need some of these patches backported to older releases, join on us irc.oftc.net in #openstack-ironic and let us know.

Where did we end up?

Overall, we have been able to reduce the time it took to download our sample data by 82% and improve the number of nodes returned per second to consumers like Nova who request lists of nodes with distinct fields in excess of 630% from our very first performance test measurements of Ironic while in the process of exploring performance bottlenecks and how to address them.

This whole effort challenged how we approached operations with node lists. 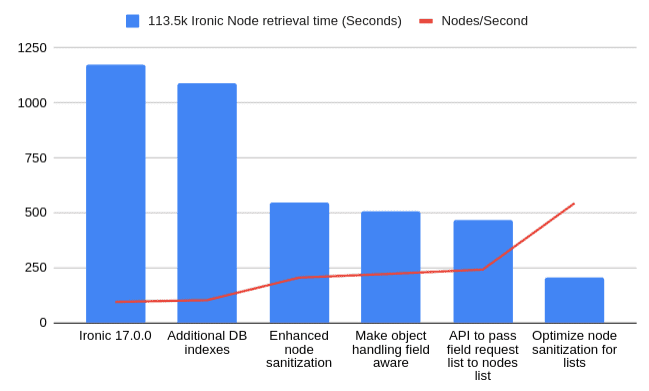 One size, does not fit everyone

Ironic fulfills the needs of several different use cases. From a Systems Administrator just needing to deploy the same OS image to a number of machines in fairly rapid order. To software deploying specialized ramdisk images and configuration such as those that may be used to stand up a small private cloud. To the largest and most complex deployments where Ironic powers the management of all Bare Metal nodes and resources within an organization.

Not only does the scale differ, but so do the usage patterns, and ultimately the resources required to continue to manage a dynamic Bare Metal cloud. In this exercise, this was something we came to learn with our code.

We treated database queries as one size fits all, and to put it blunt, they cannot be treated as such. Without writing more on the subject than anyone would want to read, there are trade-offs. Ironic now attempts to leverage the trade-off when lists of nodes are being requested which should improve general node list performance. The trade off being in those cases, Ironic will no longer use a database join to pull in a composite field for a node. This is because that join was actually triggering additional overhead in the SQL client as the result set was being downloaded and converted for use by the program. Basic performance testing shows this change to be on-par with when we utilzied joins, but it should help operators who use one or more node traits assigned to a node.

Now that we have have some awesome performance improvement merged to Ironic, there are obviously several future steps we can take. Only time will tell if we will take them.

Feel free to join us in #openstack-ironic on irc.oftc.net if you have any questions!